After his mother gave him his first 4-string as a youngster, California based veteran bass player Mitchell “Mitch” Coleman (a native of Cuba, AL) spent most of his time practicing and evolving his technique, eventually developing a unique style all his own. Even as a teen, Coleman had been enthused and motivated by the artistry and skillfulness of trumpeter Miles Davis and renowned bassists Marcus Miller, Stanley Clarke, Mark Adams (founder of funk band Slave), Louis “Thunder Thumbs” Johnson (The Brothers Johnson), and former Sly and the Family Stone alum and “Father of the Thump” Larry Graham. But it was jazz- fusion virtuoso Jaco Pastorius who influenced him the most. 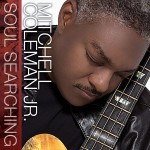 With the release of his first solo effort, “Soul Searching,” an instrumental jazz/ funk fusion collection that interweaves music inspired by his much admired influences, Coleman has fulfilled a lifelong dream of creating the music he hears in his heart and feels in his soul – and sharing it with the world. The disc, independently released on Soul Revelations Records, features some of L.A.’s funkiest players: his long-time collaborator and “Soul Searching” co- producer, Hollywood Dawkins (piano and vocals), Deron Johnson (formerly with Miles Davis) on keyboards, Kayta Matsuno and Sean Fabian are on guitar, Tim Anderson and Sal Avila are on saxophones, while industry veterans and sisters, Pam and Joyce Vincent (formerly of Tony Orlando and Dawn) and Jim Gilstrap perform background vocals along with newcomers Sean Thomas and Nodesha. Mitchell also teams with Veteran Motown Producer Michael B. Sutton to co-produce ‘Flow’, ‘Ethiopia Love’, and tribute to Joe Sample ‘When Your Life Was Low’.