After spending nearly the last decade and a half forging a highly successful career in artist tour management and concert & event promotion, popular Canadian blues vocalist/harp player Jordan Patterson has returned to his first love and passion; playing and singing the blues. The success of Patterson’s EP “The Back On Track Recording Project” with the hit-tracks ‘Heartbreaker’ (#5 in 2014/2015) and ‘Play My Song (#15 in 2015) has thrust this contemporary blues artist back in the spotlight, reigniting a successful and exciting career and marking the triumphant return of one of Canada’s most beloved blues artists.

Patterson has performed at notable music festivals at home and abroad including the Tampa Bay Blues Festival, Trois Rivieres Blues Festival, Festival International de Jazz de Montréal, the UK’s Burnley National Blues Festival, the London Blues Festival, Helsinki, Finland’s April Jazz Festival and many more. Patterson has also performed at venues throughout North America and Europe with some of the music industry’s true legends, including James Brown, Barbara Morrison, Carlos Santana, The Fabulous Thunderbirds, Mick Fleetwood, Robert Cray, Son Seals, Savoy Brown and Texas bluesman, U.P. Wilson, with whom he recorded the album Whirlwind. In 1996, Patterson released his debut album Give Me a Chance with The D.C. Hurricane. The solid offering featured guest performances from blues legends Bobby Rush and Bobby Parker which led to the  opportunity to record sessions for the BBC Musical Archives, which were broadcast all throughout the European continents; amassing him many more fans in the process.

The 2014 release of the The Back On Track Recording Project EP instantly raised Patterson’s profile within the Canadian and international blues community with extensive airplay on Canadian radio and in the USA, including rotation on Sirius XM radio and the track “Don’t Take Me Down” was featured on Elwood’s BluesMobile and selected as one of Elwood’s Blues Breakers. The EP was featured in notable publications such as Blues Matters!, Living Blues, PopMatters, New Canadian Music and more.

Now, Patterson released the full-length “Back On Track Recording Project” with The Jordan Patterson Band, featuring drummer Benjamin Rollo, bass player Mark McIntyre, guitarist Darryl Romphf, Washington DC-based, guitarist Bobby Thompson alongside Patterson on vocals and harmonica. Renowned vocalist Skyler Jordan (aka Barbara Wilson) makes a guest appearance on two tracks, “You’re My Girl” and “Can We Fall In Love Again”. This tight, heavy line-up of stellar musicians add depth and groove to perfectly compliment Patterson’s smoky vocals. The album consists of 10 original songs all written by Patterson, showcasing his many musical influences including funk, rock, blues and soul. The CD is produced by the band’s guitarist Darryl Romphf. With six new tracks (Favourite Boy, Can We Fall In Love Again, She’s Cool, You’re My Girl, Living Without Your Love and Do You Believe) as well as remixed and mastered versions of the original four tracks from the EP (Play My Song, If You’d Help Me Please, Heartbreaker and Don’t Take Me Down), Patterson’s exceptional harmonica playing, sophisticated song writing and refreshing blend of rock n’ roll and blues are all highlighted throughout this highly anticipated release.
Highly recommended. Excellent stuff! 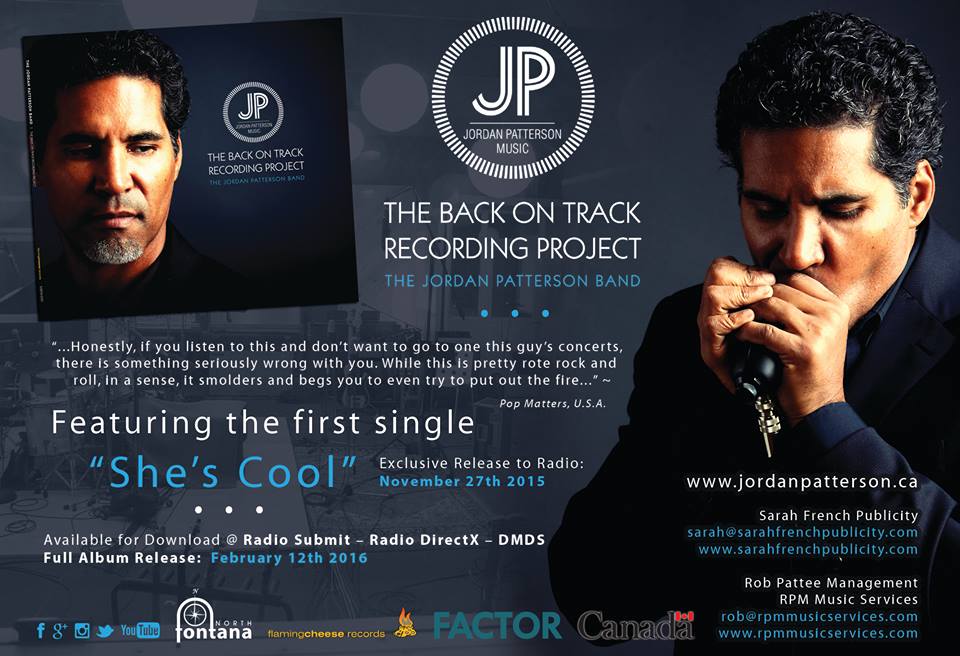