Electrifying Rock With a Blues Soul.

Dave, the son of the gifted composer arranger producer Sammy “Forever” Fields grew up In New York City and spent a lot of time in his father’s recording studio being exposed to the likes of Sammy Kahn, Rupert Holmes and Stevie Wonder. His sister Launa, a gifted musician in her own right, lost her hearing by the time she was 14. Witnessing his sister’s struggles in a hearing world profoundly affected Dave. “After seeing my sister’s agony from being discriminated against for her condition I was determined to never let that kind of injustice happen again in my presence. I always felt that one of my missions in life was to be able to communicate with people and to listen to them. It’s one of the beautiful things about being a human being. We all want to connect with one another”. Nowhere is that feeling more evident than in Dave’s music. His gift of making his guitar talk combined with his uncanny way of weaving many different styles of music together is an example of how we as humans are a fabric of many different cultures and walks of life.

Dave’s musical path has been quite a journey, after attending Berklee College of music, Dave is a first call guitarist and multi instrumentalist and has performed with the likes of Hubert Sumlin, U2, opened for Blues Traveler and won Best Self Produced CD 2006 at the IBC for producing Back In Bluesville. His CD’s “Time’s A Wastin’”, “All Wound Up” & “Detonation” have been an international success in such countries as France, Italy, Denmark, Norway, Belgium, Holland, Russia and Australia.

His awards include Big City Blues Magazines “All You Need Is Love” Happy To Have The Blues Lifetime Achievement award, the 2006 IBC Best Self Produced CD (Roxy Perry Back In Bluesville), The Legendary Blues Cruise Mojo Boogie Award 2009-2010. On May 20th 2012 he was inducted into NY Blues Hall Of Fame along with John Hammond and Gary US Bonds. Lastly you can hear Dave’s song “Train To My Heart” on legendary bluesman John Mayall’s CD “Tough”. 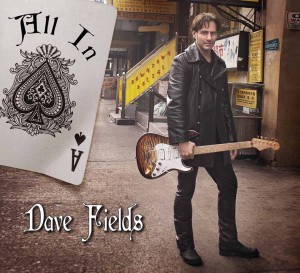 Dave Fields new CD “ALL IN” will electrify you with its rockin’ blues soul. Never before has the fire and intensity been of Dave’s guitar been captured in recording like it has on this new CD! “ALL IN” features 11 songs: 9 originals, a funky ‘live’ version of Led Zep’s ‘Black Dog’ and a burning rendition of the timeless classic ‘Crossroad’. “ALL IN” being recorded mostly live in the studio, features many of the same musicians on Dave’s first three CD’s: Andy Huenerberg (bass), Kenny Soule (drums), Vladimir Barsky (keys), Dave Moore (drums) and some new comers: Tony Tino (bass) and special guest BMA nominee Dave Keyes (piano).