Formed in late 2010, Tweed Funk has garnered national and international acclaim for their horn-driven, sweat-soaked, soul-blues. This Milwaukee, Wisconsin band is fronted by Joseph “Smokey” Holman, who recorded under Curtis Mayfield in the early 70’s. Tweed Funk boasts 3 Wisconsin Area Music Industry (WAMI) wins in the last 2 years for the band and it’s members. Tweed Funk’s two CD releases and performances at blues festivals and top blues-rooms have earned the band praise from press and media around the world.

The band’s third CD, “First Name Lucky”, has been well received with the following awards and accolades:

On April 29 Tweed Funk will release their 4th album “Come Together”, which consists of 10 new original songs. The band made a concerted effort with the new album to focus on writing quality songs as opposed to writing to a formula. Additionally, Tweed Funk wanted to take advantage of their revised line-up and work more collaboratively in the songwriting process.

This feel good album makes us already happy in the first spin. It’s on repeat now! 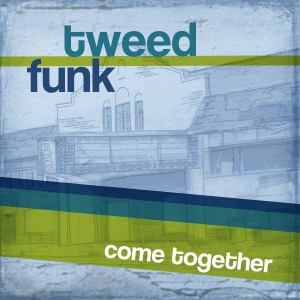