Rick Randlett first discovered the blues in college in the 70’s. Like many of his generation, bands such as Cream, The Yardbirds and early Fleetwood Mac led him back in time to Muddy Waters, Howlin’ Wolf and eventually Robert Johnson. A move to Florida in the 80’s led to performances with country music artists, and now songs by Hank Williams and Johnny Cash sit comfortably next to songs by Big Bill Broonzy and Rev. Gary Davis in Rick’s live shows. 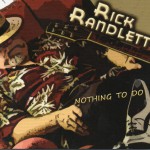 In November 2013 Rick’s second acoustic flavored cd came out, titled “Nothing To Do”. A tour of acoustic blues styles with a decidedly non traditional approach. Two tracks of the album made it into the Hit-Tracks Top 100: ‘Heart Made Of Stone’ and ‘Out Of Time’ (12 weeks in chart with a peak at #29). Special notice must be given to the title song, a duet with Pete Karnes, former harmonica player for John Lee Hooker. Rick is ready for The Netherlands and the rest of Europe.
www.rickrandlett.com