Born Katherine Elise Baloun, July 27, 1956 in El Paso, Texas, Kat Baloun grew up in Cincinnati, Ohio. Her mother was a classical pianist & organist, and she directed the church choir in which her father and Kat sang. She started on the piano with 5, followed by violin at 7 and at 13 harmonica. During her teens and twenties she played only occasionaly. 22 years later (1991) she met several musicians when she was living in San Francisco. They encouraged her to start playing the harmonica again. Shortly thereafter (1992), she joined the Elmer Lee Thomas Blues Band as harp player and then was later encouraged to sing. In 1994 Kat moved to Berlin and put her own band together. In 2002 she formed a band with Nina T. Davis called the Alleycats and made two cd’s. In 1998 she formed with Hattie St. John, who had also moved to Berlin from New Zealand, a duo called, Ladies First. They made two cd’s together with acoustic folk-blues-jazz. She’s also been playing with the Wild Women. 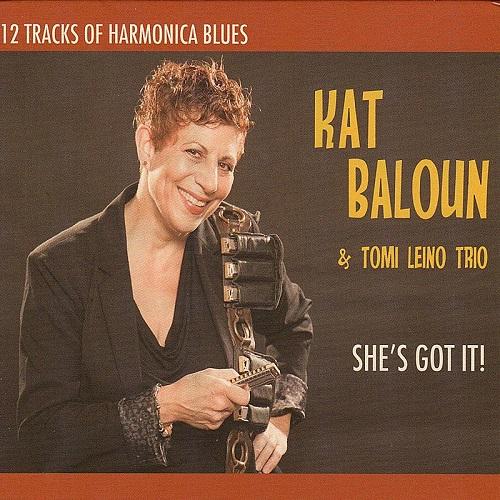 Her latest album “She’s Got It“ (2013) is made with the Tomi Leino Trio from Finland. Tomi Leino (guitar), Jaska Prepula (bass and guitar) and Mikko Peltola (drums). On the album are 12 tracks of harmonica blues, two of them are written by Kat. Among the others are songs from Little Walter, Big Jay McNeeley and Lavern Baker.