Formed in 2006 by multi-media artist Justin Curfman, Feeding Fingers began life as an Atlanta post-punk trio and has evolved into an internationally connected musical project with intermittent members from the USA, Germany, Austria, and Italy. Nearly impossible to pigeonhole, Feeding Fingers invokes such disparate genres as darkwave and avant-garde, krautrock, world fusion, and almost anything one could name in between. Its reinvention process spans across five albums and nine years, from young Curfman’s angst-ridden “Wound In Wall” (2007) to what is his crowning musical achievement to date, the triple-length magnum opus, “Attend” (2016). The journey has always been a closely personal one, from the intense anger and sparse loneliness inherent in “Baby Teeth” (2009) through the hopes reconciled with fatalism in “Detach Me From My Head” (2010), and into “The Occupant” (2013)’s quietly brilliant breakthrough, beginning the metamorphosis which made “Attend” possible. Through its various lineups, Curfman remains at Feeding Fingers’ core; his is the voice through which the music speaks, and although many people have brought the project into being over the years, it is he who remains its heart and soul. Feeding Fingers is the machination of what lies within Curfman – and it manifests in the darkness dancing within every single one of us. Through the haunting beauty of the vocals, the melodic schism between dream logic and the heavenly hidden within the ordinary, the music of Feeding Fingers continues to resonate with truth, and the quivering fragility held flickering like fireflies in a jar.

Feeding Fingers has toured North America and Europe consistently since 2006 with acts such as IAMX, David J. (Bauhaus, Love & Rockets, etc.), Nitzer Ebb and many others, including two live appearances on NPR (National Public Radio). A world tour in support of their forthcoming triple album, “Attend” is being organized now and will begin during the first quarter of 2016. 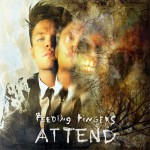 2016 > Where All Of These Towns And Choices End